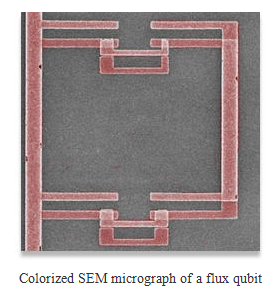 Superconducting circuits are often considered as a leading potential candidate for the physical realization of quantum computers. These circuits can be easily fabricated, manipulated and coupled together using simple linear electrical elements like capacitors, inductors and transmission lines.

It can be shown that such a circuit behaves as a two-level system when the flux threading the loop is close to half a flux quantum. Each level is characterized by the direction of the macroscopic permanent current Ip flowing in the loop of the qubit. At precisely half flux quantum, the two levels are degenerate, hybridize and give rise to an energy splitting Δ, which is called the flux qubit gap.

The properties of the flux qubit have triggered intense interest in the last decade and offer interesting prospects for the future of hybrid quantum circuits. Its large magnetic dipole couples very efficiently to spins and could allow an efficient transfer of the quantum information between distant spins. In the last years, improvements of superconducting qubit architectures have led to an impressive increase of the coherence times of these qubits [1,2]. We are currently developing new types of superconducting tunable flux qubits and studying their coherence properties [3].